What is a Computer Grade Capacitor?

Power electrolytic capacitors or computer grade capacitors, as they have been traditionally called are a good choice for applications that require large capacitance or a high voltage. They are aluminum electrolytic capacitors that are offered in a can with screw terminals. As the name “computer grade” implies this style of capacitor was originally designed for main frame computers because of their long life and high ripple characteristics. These same characteristics have proven to make them a popular choice in designing power supplies, welding equipment, communications systems and in automotive applications.

The high volumetric efficiency of an electrolytic capacitor is due to its enhanced plate surface area and a very thin dielectric layer. A very large internal surface can be created on the aluminum electrodes by electrochemical etching. The dielectric is an oxide and has high dielectric strength electrochemically deposited in very thin layers. This combination produces a high capacitance in a small volume.

New technology introduced by the manufacturers of this product has enabled them to make improvements in both the performance and the physical packaging of these capacitors. An example is the 3186 series manufactured by CDE. This series is available with the capacitor element potted in place or secured by rills, spoon shaped dimples, in the side of the can. This style of rilled construction provides excellent heat transfer into the sides and bottom of the can. It also improves the ripple current handling of the capacitor.

Additional improvements to be mentioned are high gain aluminum foil which allows these computer grade capacitors to be lighter in weight and smaller in size. Extended cathode design which permits better heat transfer from core to ambient and lower internal temperatures. Additional improvements can allow for tolerances as low as 20%.

The voltage range for computer grade capacitors starts as low as 3 volt DC and can be as high as 500 volt DC. The capacitance range can start at less than 100 micro farad and go as high as 1 farad.

How to read Computer Grade Capacitors? 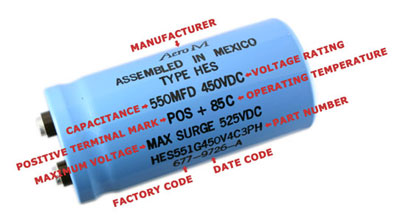