What are Motor Capacitors? 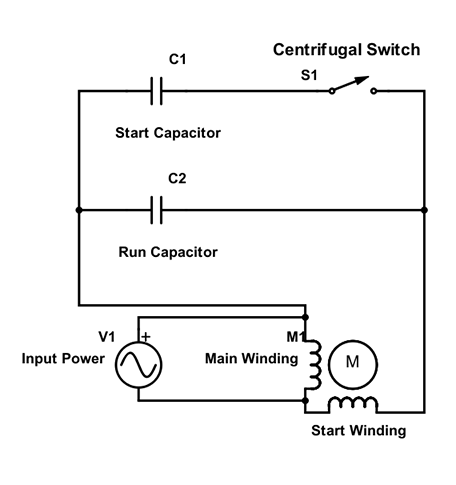 Start capacitors are responsible for increasing the starting torque of a AC motor, which in return cycles the AC motor on and off rapidly. Start capacitors stay in the circuit long enough for the motor to reach a determined speed (typically 75% of full power), and then it’s taken out of the circuit by a centrifugal switch. After the starting process AC motors work more efficiently with run capacitors.

Start capacitors are electrochemical devices consisting of compactly wound aluminum foil separated by layers of paper, which are impregnated with a conducting electrolyte. Etching of the foil prior to formation and winding increases both the effective foil surface area and the capacitance per unit volume of the finished capacitor. The entire assembly is housed in a case of moisture and oil resistant molded plastic. Start capacitors are rated for operation in ambient temperatures from -40°C to +65°C and at a frequency of 50Hz to 60Hz (applications at higher frequencies are not recommended).

Start Capacitors have a fixed capacitance and voltage. They typically have a capacitance range rated above 70uF.
The most common voltages are:

Note: Any start capacitor that is rated above 20uF is a non polarized aluminum electrolytic capacitor with a electrolyte that is not solid. Meaning that it's only applicable for mommentary use.

Run capacitors have a fixed capacitance and voltage. The capacitance ranges from 1.5uF to 100uF.
The most common voltages are:

They are rated with two capacitance values, allowing the capacitor to be used for two different applications at the same time. An example would be 20uF + 5uF at 370VAC. Dual run capacitors are often found in air conditioners. They are used to supply power to both the fan motor and the compressor motor.